Despite predictions of the new Education & Research Centre being completed in 2015, very little happened at the site after the sod-turning ceremony in 2013. The building was redesigned several times, ending up as modular construction, and the actual site was moved about 100 metres south of the old schoolhouse on the same side of the road (east side). In 2018, several influential donors to Thompson Rivers University (TRU) began to question the long delay. TRU finally issued a tender for construction bids in February 2019, but time ran out to start work that fall. As soon as the snow was gone in April 2020, work on the foundations began, and the three modular buildings were moved there in May and assembled into one structure. It accommodates 20 students and faculty in five bedrooms, a laboratory / work area / dining hall, a commercial kitchen, and two bathrooms. The furnishings, donated by the Neave family, were moved in during February 2021. Solar panels were added to the west side of the roof in March, and the building is now self-sufficient for power, actually generating enough power to sell the excess to the BC Hydro grid. The first programs were offered in April 2021. After so many years of planning, the Centre has become a magnificent facility, with bookings much sought after by faculty who want to run courses starting in September 2021 when TRU returns to in-class instruction after Covid-19.

You will notice that the schoolhouse looks completely different from the photo on page 54. The building has been fully renovated and modernized. The project was spearheaded by a group of enthusiastic Upper Clearwater volunteers who succeeded in raising over $20,000 for materials and labour. More improvements are planned as money is donated to the society. The former teacherage building is in poor condition, and donors are debating in 2020 whether it is worth repairing. The schoolhouse now hosts many social events among local residents. It is also being used by TRU as a second classroom along with the adjacent E & R Centre.

Just 600 metres south of the schoolhouse is the Community Hall, owned and operated by the Upper Clearwater Farmers’ Institute since the 1940s (see full story pages 51-53). It is partly supported by a government grant of $5,000 annually. Starting in 2014, some local residents felt they were no longer welcome at events in the hall and split away. They started to use the facilities at the TRU schoolhouse, eventually forming a separate society and fund-raising for the renovations described above. In 2016, the Thompson-Nicola Regional District (the local government authority) held a vote on whether to continue the annual grant which was funded by property taxes charged to every land owner in the Valley, no matter whether they used the hall or the schoolhouse. The vote passed by a margin of one to continue the taxation and the grant to the hall. By 2018, tensions were easing between the two groups. The end result has been positive since there are now two beautiful facilities in the Clearwater Valley where meetings, weddings, lectures, and social events can be held.

To find a correction or update look through the posts to the left. To narrow down your search to a particular Wells Gray region, you can choose from the list, below, or do a key-word search for particular trails, roads, businesses, etc.

If you have a correction or update to submit, or want to get in touch with us, please click here. 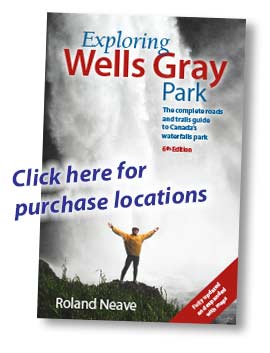 About every two weeks during the season the park ranger publishes a PDF trails report. You can find that here.